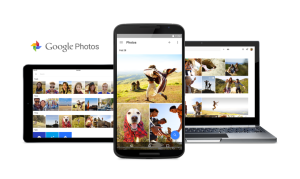 If you’re not reaching, engaging, and monetizing customers on mobile, you’re likely losing them to someone else. Register now for the 8th annual MobileBeat, July 13-14, where the best and brightest will be exploring the latest strategies and tactics in the mobile space.

Google today launched Google Photos for Android, iOS, and the Web at its I/O 2015 developer conference. During a special event following the announcement, the company dived deeper into its new product.

After taking a slew of photos, whether on vacation or during an important event, most people upload photos to Facebook first. With Google Photos, it’s very clear that’s a habit Google wants to break.

Google Photos is mainly aimed at mobile, but it does have a desktop uploader tool (called Google Photos Backup) for Windows and Mac. It can automatically grab photos and videos from specific folders, hard drives, SD cards and cameras (connecting a new device gives you three options to choose from: always import, just once, or never). The Web app is also quite powerful, as we found out ourselves.

But this isn’t just a new version of Picasa. Google is using computer vision and deep learning to automatically organize and index all the photos you give it access to.

During the press event, examples included automatic categorization by person (including over decades as people grow up, Google Photos can still guess that a child and an adult are the same individual) and places (including when geolocation data is unavailable, Google Photos can infer the location in pictures based on over 250,000 recognized landmarks). You can search for any term you can think of, and if Google Photos has recognized that item in your photos, they will show up.

The Assistant automatically creates panoramas and animations, as well as lets you choose to put together various photo creations. It even keeps track of all the photos and videos that have already been uploaded to the cloud, and offers to let you delete all these copies to free up space on your mobile device.

All that being said, Google isn’t interested in monopolizing your photos and videos. Sharing your snaps and shoots is very much possible in Google Photos — you could almost say it’s encouraged. Nonetheless, Google Photos is still clearly meant to be the starting point.

Google isn’t going to suddenly steal Facebook’s photos crown, and it doesn’t want to. Facebook doesn’t offer very many photo management nor editing features. Once you’ve uploaded your shots to Facebook, those albums are static. You can add photos, tag your friends, and so on, but you can’t do much with the photos themselves.

There simply isn’t a photo storage service out there right now that not only works great on the desktop and mobile, but also offers features that make you want to back up your snaps. Google Photos is trying to fill that big hole.

Google is okay with relinquishing the social part of photos (Facebook, Instagram, and so on can handle that). The company knows there is a lot more to photos than likes and comments.

Google knows it sucks at social, at least when it comes to photos, but there’s still a lot more that can be solved and improved. Instead, Google Photos is meant to dominate managing, editing, backing up, sharing, and saving.

It’s almost as if Google wants to position its photos product as the anti-Facebook or the anti-social network. The company emphasized that shared links to photos and videos can be revoked, features like automatic organization and sharing geolocation can be turned off, and that all sharing occurs as deliberate actions taken by the user.

During the keynote and the press event, in its blog and Google+ posts, Google emphasized again and again phrases like “secure and safe space,” “for your eyes only,” “very private,” “building a product that users trust,” and of course, “standalone product outside of Google+.”

In fact, Bradley Horowitz, head of Google’s new SPS (Streams, Photos, and Sharing) team, bluntly said “photo management is not aligned with what Google+ is aiming to achieve.” Google+ is evolving to help users “connect around shared interests and passions” he added, but if they want to do anything with visual content, they’ll be redirected to Google Photos.

In response to a question about whether Google Photos will end up generating revenue similar to how Gmail does (serving ads based on the information it finds in your emails), Anil Sabharwal, lead product manager of Google Photos, said the company has “absolutely no plans to do anything from a monetization and ads perspective.” Unsurprisingly, that statement started with “for this launch” – eventually, if Google Photos succeeds, the company will explore its options.

Until then though, Google wants to make Google Photos the best digital place for your photos. The company may not be able to make money from them just yet, but it can improve its various computer vision technologies. All it has to do is convince you to upload first to Google Photos, and not to Facebook.