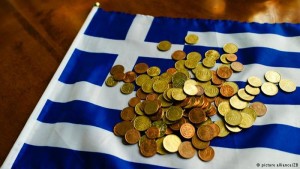 For months, pundits have been warning of a looming Greek default. The country’s cash reserves are drying up. But if that’s so, how has Athens managed to continue to meet its debt repayment deadlines? It’s certainly not thanks to a flood of tax money flushing into state coffers. No, it’s mainly because of the European Central Bank (ECB).

“Greek commercial banks are currently being kept afloat by emergency liquidity courtesy of the ECB. They use this money to acquire short-term treasury bills from Athens. That buys the government some breathing space – at least for a couple of weeks,” said Nicolaus Heinen, a Deutsche Bank analyst.

To help the country make ends meet, the central bank has also begun tapping another source of funds: It’s ordered municipalities and state-owned entities, from mayor’s offices to kindergartens and hospitals, to hand over their cash reserves.

It’s hand-to-mouth times in the Mediterranean nation. A state living from repayment to repayment, staring at a very packed schedule: From June to September alone, Greece will have to transfer some 5.4 billion euros ($6 billion) to its biggest creditor, the International Monetary Fund (IMF).

However, that’s money it doesn’t have, which is why it’s been spending nearly four months trying to convince its international creditors to unlock the final 7.2-billion-euro tranche of its 240-billion-euro bailout.

But even that won’t cut it. To repay its debt including interests it would likely need a third aid package. The problem is that the lenders have ruled out giving Greece more money until Prime Minister Alexis Tsipras has presented them with a convincing list of reforms. So far, however, that’s something his hard-left government has refused to do.

Talk about a dead-end street. Right? Not so fast. Although no one’s expecting a breakthrough at Monday’s meeting of eurozone finance ministers in Brussels, Nicolaus Heinen is confident that the creditors will eventually unblock the last installment – at the 11th hour, end of June.

“Greece and its eurozone partners are going agree that Athens has done just enough to warrant opening the tap and let the funds flow, in order to secure some level of systemic stability,” the EU expert told DW.

And that won’t be the end of it, predicted Heinen, who said a third aid package was likely in the pipeline.

“Geostrategically, Greece is located in a very important part of Europe. Europe needs Greece as an outpost in the eastern Mediterranean. That’s why Europe won’t simply abandon Greece,” he said.

Athens, he added, is all too aware of this, and that’s emboldened its negotiators to stand firm in Brussels.

“The Greek government’s behavior may appear erratic, but it’s probably a good indicator that the country’s outlook may not be half as bad as many media reports would have us believe.”

Still not out of the woods

That doesn’t mean Greece is in the clear, though.

“The administration in Athens is so chaotic that short-term insolvency cannot be ruled out,” cautioned the Deutsche Bank analyst.

But a “Graccident” doesn’t have to lead to a “Grexit.” Investors are unlikely to break out in panic, said Heinen. After all, 80 percent of the country’s sovereign bonds are currently in the hands of other eurozone members. This means the buck wouldn’t simply stop with Greece – when it comes to a default, it’s all in the family. That’s why the ECB is likely do anything in its power to prevent a collapse.

“It is safe to assume that the ECB would allow the Greek central bank to increase the liquidity lifeline to the country’s banks, so that they can help Athens refinance in the short term.”

Reason enough to believe that a Greek default won’t reach Argentinean proportions, predicted Heinen, referring to last year, when the South American government went out of business for several months.

The drachma won’t stand a chance

However, there’s another reason why Greece is likely to remain in the currency union, noted Heinen.

“Countries with a strong currency can’t very well replace it with a weaker one.”

In other words, should the Greek central bank be forced to reintroduce the drachma, it simply wouldn’t be strong enough to compete with the euro.

Still, staying in the eurozone isn’t the cure-all for Greece’s problems.

“Given its unsound fiscal policies and high political risks, Greece will continue to be a ‘failing state’ for the foreseeable future, likely to keep its euro-partners on tenterhooks.”

Source of Britain’s River Thames driest ever as drought nears