(AA) – Liberian authorities on Saturday arrested a Lebanese national and accused him of involvement in the trafficking a large number of Liberian women to Lebanon.

The authorities said they placed Abbas Dbe at Monrovia Central Prison, the largest jail facility in the Liberian capital.

Four other people are still being hunted for in connection with the same charges.

“The government has zero tolerance to those violating the rights of our women,” Isaac Jackson, Liberia’s deputy information minister, told The Anadolu Agency.

“The government is concerned that this man can send our women out of Liberia under claims that they would have better jobs and life [in Lebanon],” he added.

The official said Liberian women told “horrible” stories of rape at the hands of men in Lebanon.

If convicted, Dbe can be sentenced to 20 years in jail.

Liberia succeeded in bringing back 14 trafficked women in recent days under pressure from their families.

Nevertheless, the women have not reunited with their families yet.

At least 62 women have been trafficked to Lebanon so far by Dbe and other people, including some top security officials in Liberia. 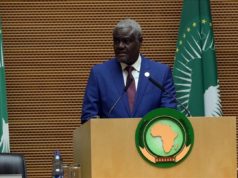 Back on top, Federer becomes oldest ATP world number one