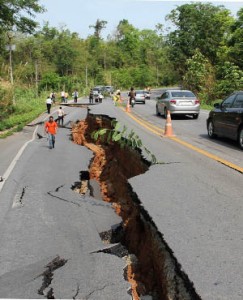 A magnitude 8.5 earthquake struck off the east coast of Japan on Saturday, shaking buildings in Tokyo, but there was no danger of a tsunami and no reports of damage since the quake was extremely deep.

There were no reports of further irregularities at the Fukushima Dai-ichi nuclear plant, damaged four years ago in a massive 9.0 magnitude quake, or any other nuclear facilities.

The Shinkansen high speed train line had briefly stopped between Tokyo and Osaka due a power outage and some trains in Tokyo stopped as well for safety checks, causing crowds of commuters in some of the city’s liveliest areas to mill around outside stations.

The quake, centred off the Ogasawara islands south of Tokyo, occurred at a depth of 590km and, unusually, was felt throughout much of Japan.

“It shook violently. Our Buddhist altar swayed sideways wildly,” Michiko Orita, a resident of the island of Hahajima, near the epicentre, told NHK national television. “I have not experienced anything like that, so it was so scary.”

She added that things on the island were normal.

There were no reports of significant damage or injuries, though the Tokyo Fire Department had received calls about people suffering injuries through falls, NHK said.

In Chiba, just east of Tokyo, loudspeaker broadcasts called on people to remain calm, but there were no signs of damage.

“Since it was magnitude 8.5 this was a very big quake, but fortunately it was very deep at 590km,” Naoki Hirata, an earthquake expert at the University of Tokyo’s Earthquake Research Centre, told NHK.

“But the shaking was felt over a broad area… Fortunately, because it was deep, there is little danger of a tsunami.”

Tokyo Electric Power said there were no abnormalities at the crippled Fukushima nuclear power plant following the quake.

On March 11 2011, a massive 9.0 magnitude quake touched off a tsunami that left nearly 20 000 people dead and nuclear meltdowns at the Fukushima Dai-ichi nuclear plant.

Japan, one of the world’s most seismically-active nations, has been seeing a period of unusual activity over the last year or so. In September 2014, 63 people were killed in the eruption of Mount Ontake, a volcano in central Japan.

On Friday, at the end of a week marked by several earthquakes in Tokyo, a volcano on the remote southern island of Kuchinoerabujima erupted, forcing the evacuation of the island’s entire population. Volcanic activity has also picked up at a resort area not far from Tokyo.