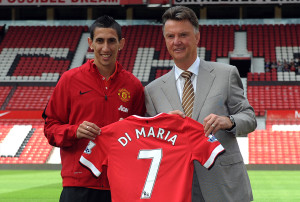 As Manchester United gear up for another summer of big-spending ahead of a return to the Champions League, they will be acutely aware that the majority of last summer’s signings have hardly hit the ground running.

And the two headline arrivals, Angel Di Maria and Radamel Falcao, have struggled more than most. Di Maria, signed for a British transfer record £59.7 million, moved to Old Trafford having played a vital role in Real Madrid’s Champions League success in 2013-14 and Argentina’s run to last summer’s World Cup final.

There was much fanfare, too, when Falcao rocked up in Manchester on transfer deadline day, less than 48 hours after it had appeared he was on his way to Real Madrid.

But while things looked promising in their first handful of games, the form of each player has tailed off dramatically.

With both earning a whopping £300,000 per week, the following figures will make grim reading for United’s bean counters.

For Di Maria alone – considering the £59.7m the Red Devils promised to pay Madrid, along with the 36 weeks’ worth of wages since he committed himself to Van Gaal’s revolution – United have so far paid out£70.5m. If he stays at Old Trafford for the full five years on his contract, he will take home £78m in basic salary alone.

But it has been a complicated season for the Argentine. He actually has 10 assists, the second highest tally of any Premier League player, but you get the sense that if he played with a cooller head he would have racked up far, far more.

His appearance from the bench against Liverpool at Anfield essentially summed up his debut season. He played a fine ball to Juan Mata for the Spaniard’s sublime bicycle kick, and in the final moments he made an intelligent pass to Daley Blind, who then earned a penalty. But, in truth, everything else he tried on that day went to waste – ill-advised dribbles, poor touches and overambitious passes. At one point he caught the ball in both arms before it had even gone out of play.

As it stands, though, those 10 Premier League assists have cost United £7.5m each. He has another one in the FA Cup, making it £6,409,090 per assist in all competitions. A fair old chunk for anybody’s money.

The headline figure, though, surely, is when it comes to goals. Di Maria’s four in all competitions cash in at£17,625,000 each. In terms of league goals alone, that figure rises to £23.5m – even if that beautiful lob against Leicester City was worth its weight in gold.

For Falcao, the record loan signing, the figures are just as stark. Although there was no permanent transfer fee – he only set United back £6m in the shape of an up-front loan fee – he still commands a massive salary and to this day he has cost the club £16,800,000.
The ailing hitman has started just 13 games, working out at £1,292,307 each. Having not found the back of the net since January, the Colombian has scored just four times for United. That, staggeringly, is £4.2m per goal.

Unfortunately, he has hardly been a creative force either.

In 28 total appearances, (£600,000 each), he has set up just 18 chances in all competitions, at a cost of£1,119,047 for every one. Having played 1435 minutes in all competitions (£11,707 per minute), that is one chance created every 79 minutes.  In three FA Cup appearances, he has scored no goals and created no chances whatsover – against Yeovil Town, Cambridge United and Preston North End.

Booker holds back on questions about ‘Empire’ actor attack

Clinton says US could ‘ring China with missile defense’