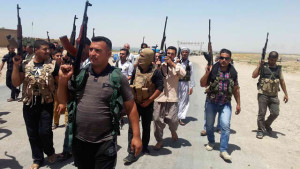 (AA) – The raising of the Daesh threat to the northern Iraqi town of Tuz Khormato has been replaced by another menace – sectarian violence between the Shia Muslim militia that now controls the town and Sunni residents.

The Turkmen majority town, located 88 kilometers (55 miles) south of Kirkuk in Saladin province, had been threatened by Daesh militants until last month, when al-Hashd al-Shaabi militia and Kurdish peshmerga forces drove the extremists back.

According to officials who spoke to Anadolu Agency, the town, which has significant Arab and Kurdish populations, is beset by religious and ethnic tensions.

Kemal Ahmet, a local Kurdish politician, said near-daily murders and kidnappings were taking place. “Now we have sectarian and ethnic strife,” he said.

“The main [group] responsible are the Shia militants who act on a sense of revenge. They want to retaliate for past attacks on Shia Turkmen neighborhoods.”

The pattern of revenge attacks against Sunni Muslims in areas freed from Daesh control is one that has been seen elsewhere in Iraq, where Shia militias carry out reprisals for the Sunni population’s perceived collaboration with Daesh.

Hasan Baram, a Patriotic Union of Kurdistan official in Tuz Khormato, said al-Hashd al-Shaabi, also known as the Popular Mobilization Forces, targeted Sunnis when they took control of the town.

“We never took side with what Daesh did but it is equal to Daesh’s acts if citizens are killed in front of their houses,” he told Anadolu Agency.

Baram also spoke of “imposition politics” in Tuz Khormato as Shia politicians in Baghdad push for the appointment of their favored candidates.

“A Kurdish professor was elected as the dean of the education faculty in Tuz Khormato but the Higher Education Ministry appointed a Turkmen to the post,” he said by way of example.

He called for lawmakers in Baghdad to raise the issue in parliament. “Otherwise, a bad future awaits the town.”