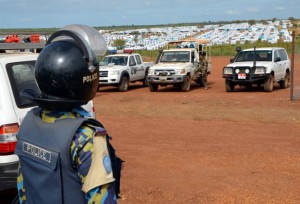 Four civilians, including a woman and a child, were killed on Tuesday when two mortar bombs exploded inside a U.N. compound in the town of Melut in South Sudan’s Upper Nile state, the U.N. reported on Wednesday as rebel forces and government troops battled for control of a strategic oil hub.

Eight more people were injured in the blast on Tuesday evening, the U.N. mission in South Sudan said in a statement, adding that it is “deeply concerned by the disregard for civilian lives, U.N. personnel and facilities.”

Fighting has recently intensified in South Sudan’s Upper Nile and Unity states as government troops and rebel forces fight for control of territory. At stake are the Upper Nile oil fields of Paloch, which the rebels said they were poised to seize on Wednesday. As the country’s last remaining functional oil fields, they are crucial for South Sudan’s increasingly vulnerable economy.

“It’s just a matter of hours” before Paloch falls, said Col. Tony Ngundeng, a spokesman for rebels loyal to Riek Machar, the former deputy president whose dismissal in July 2013 sparked political unrest that later boiled over into a full-blown rebellion.

The rebels’ claims were immediately dismissed by South Sudanese military spokesman Col. Philip Aguer, that the rebels had been repulsed and the oil fields are no longer threatened.

Haq said the leaders of South Sudan’s warring parties “haven’t acted in good faith for quite some time.”

The United States condemned the attack and called for an end to the fighting and a return to peace talks.

“The international community is footing the bill for President Salva Kiir’s and opposition leader Riek Machar’s shameful disregard for the devastating humanitarian crisis facing the people of South Sudan,” the U.S. ambassador to the U.N., Samantha Power, said in a statement Wednesday night.

Power warned that what’s needed is “an increase in international pressure on the South Sudanese parties so that they accept and implement a credible peace agreement.” She said the U.S. would continue working with the recently created U.N. sanctions committee on South Sudan to gather evidence for possible sanctions listings.

Amid the fighting, aid groups have pulled out of hotspots, leaving thousands of people in need.

Both sides in the conflict have been accused of carrying out rights abuses such as deliberately targeting children since the start of fighting in December 2013. Peace talks since then have repeatedly collapsed.