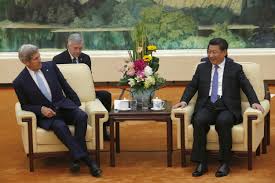 John Kerry and his Chinese counterpart gave no ground over the issue of territorial disputes in the South China Sea during his weekend visit.

The clash between Chinese and U.S. positions was on display at a joint press conference Saturday where, after a round of talks with Kerry, Chinese Foreign Minister Wang Yi described China’s determination to defend territorial sovereignty “as hard as a rock” and “unshakable.”

“It is the demand of our people … and a legitimate right of ours,” he said.

Kerry zeroed in on “the pace and scope of China’s land reclamation” and urged China to “take actions that will join with everyone to reduce tensions.”

“Smart diplomacy” is what is needed, he said, “not outposts and military strips.”

But some people contacted by NBC News expressed confidence that relations would stay stable.

“Let a Chinese Putin arise, even if the South China Sea dries up..China will recover what is ours!” said Luo Yicheng on a Tencent News online forum.

“In view of the America’s Asia pivot strategy..our country must not only resort to diplomacy but also strengthen war preparedness,” said Ivan from Zhuhai city on the same forum.

China claims most of the South China Sea, a strategic sea lane with rich fishing grounds and potentially huge oil deposits, pitting it against Taiwan and some Southeast Asian neighbors with competing claims, some of which are friends or allies of the United States.

While the U.S. has declared neutrality on the territorial disputes, it has vowed to protect “freedom of navigation”, and expressed concern over China’s rapid reclamation effort around several reefs in the Spratly archipelago of the South China Sea, which has alarmed rival claimants like the Philippines and Vietnam.

In turn, China has expressed concern about a possible U.S. plan to dispatch military aircraft and ships to challenge China’s maritime claims.

As Kerry and Chinese top leaders, which included President Xi Jinping, grappled with contentious issues through a weekend of talks, interestingly, China was showing at theaters nationwide a rare reenactment of the late leader Deng Xiaoping’s groundbreaking 1979 visit to the US, that blazed the normalization of relations and opened an era of friendship.

It is necessary “to look back at the legacy” of the leaders of both countries, said Victor Gaozhikai, a prominent international affairs commentator and former interpreter of Deng.

On Kerry’s visit, he said that despite the “ups and downs in relations”, China and the US “can only afford to work with each other as partners.”

“Any military confrontation will be mutually destructive,” he warned.

I think the relations are still stable,” said Zhang Chi, a student of Renmin University in Beijing. “Though we have some disputes, our leaders keep talking as by shown by Kerry’s visit, which is a positive signal of communication and cooperation.”

“I am satisfied with the state of relations,” agreed Xu Guang, a local government secretary in Nanchang city, Jiangxi province. “We have problems in the South China Sea but I don’t think the US is willing to pay the costs of confronting China, so I am optimistic about our peaceful relations,” he told NBC News.

“The U.S. does not trust China, especially with regards to Asia-Pacific affairs, and always ignores China’s legitimate interests, or regards China as a threat. Friendly and stable relations should be built on mutual trust,” he added.

German Economy Minister: Do not want imported nuclear power to make up for coal...

Workers evacuated from Alberta oil camps due to wildfire