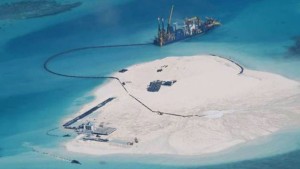 U.S. surveillance images reportedly show that China has positioned weaponry on at least one of the artificial islands it is developing in the South China Sea, apparently confirming suspicions that Beijing has been building up the area for military use.

The Wall Street Journal, citing U.S. officials, reported that images taken about a month ago showed two Chinese motorized artillery pieces on one of the artificial reefs. Although the weaponry would not pose a threat to U.S. planes or ships, it could potentially reach neighboring islands, the officials told the paper.

“There is no military threat,” one official told the Journal. “But it is about symbolism.”

The Journal reported that in recent weeks the artillery has disappeared from view, though it was not clear how of why. U.S. officials said they believed the equipment had either been removed or purposely obscured by the Chinese.

The American officials said that the artillery, is within striking range of an island claimed by Vietnam, which that country’s government has armed with various weaponry for some time.

A Chinese Embassy spokesman maintained the development of the artificial lands was primarily civilian.

“It needs to be emphasized that the Nansha Islands is China’s territory, and China has every right to deploy on relevant islands and reefs necessary facilities for military defense,” Zhu Haiquan, spokesman for the Chinese embassy, told the Journal.

On Wednesday, Defense Secretary Ash Carter strongly defended American military flights over the artificial lands in the South China Sea and called for a “lasting halt” to China’s land reclamation projects, noting that the U.S. is only seeking stability in the region.

Zhu has claimed Beijing’s activities are only meant to “improve the working and living conditions for personnel stationed there and better fulfilling China’s relevant international responsibilities and obligations.

Although China claims Washington has created a double standard in criticizing its country’s activities in the region and staying “selectively mute” about the activities carried out by other countries, U.S. officials maintain that other countries’ projects take place on a far smaller scale than China’s.

The Pentagon said in a recent report that the construction — estimated at more than 2,000 acres — could be used for military airstrips, naval ports or to host surveillance systems. U.S. officials are concerned that China’s land reclamation projects may be a prelude to enforcing a possible air defense identification zone over the South China Sea, similar to one it declared over disputed Japanese-held islands in the East China Sea in 2013.

State Department spokesman John Kirby said in a statement to the Journal that Secretary of State John Kerry has given China a clear warning about its activities.

“We watch every outpost in the South China Sea carefully and monitor the actions of the countries concerned. I can assure you that Secretary Kerry is in touch with the claimants, including China, and has been very clear in warning against actions that escalate tensions. We oppose upgrades or militarization of outposts in disputed areas of the South China Sea.”

A U.S. official told The Associated Press that there are concerns China is working to build a perimeter around the South China Sea so it could claim the entire region as its own economic zone, with rights to all natural resources there.

Trump aide dismisses as ‘quip’ his threat to jail Clinton