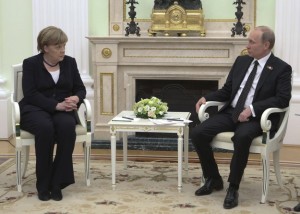 Russian President Vladimir Putin on Sunday defended the infamous pact between Nazi Germany and the Soviet Union that agreed to divide up eastern Europe during a visit by German Chancellor Angela Merkel.

On August 23, 1939, Germany and the Soviet Union agreed to carve up eastern Europe between them in a secret clause of the Molotov-Ribbentrop Pact on non-aggression.

“When the USSR realised that it was left facing Hitler’s Germany alone, it took steps so as to not permit a direct collision and this Molotov-Ribbentrop pact was signed,” Putin said at a news conference in response to a question from a journalist.

He was asked to respond to comments by Russia’s outspoken culture minister Vladimir Medinsky praising the pact as a triumph of Joseph Stalin’s diplomacy.

“In this sense I share the opinion of our culture minister that this pact had significance for ensuring the security of the USSR,” Putin said.

He stressed that the Soviet Union had been pushed to sign the pact after the earlier 1938 Munich agreement signed by Britain, France and Italy with Adolf Hitler ended hope of a united front against the Nazis.

The pact came after the USSR made “numerous efforts to create an anti-Fascist bloc in Europe” that ended in failure, he said.

Putin had in the past condemned the pact as unethical.

“Today we understand that any form of agreement with the Nazi regime was unacceptable from the moral point of view and had no chance of being realised,” Putin wrote in a 2009 article in a Polish daily on the 70th anniversary of the outbreak of World War II.

Merkel for her part on Sunday condemned the pact, which included secret protocols dividing up Poland and allotting the Baltic states to Moscow, while conceding that historical responsiblity for World War II lies with Germany.

“From my point of view, the Molotov-Ribbentrop Pact is hard to understand unless you take into consideration the extra secret protocol.”

“And from this point of view, I consider it was not right, it was done on an unlawful basis,” Merkel said in translated comments.

The German leader was visiting Moscow a day after she and other Western heads of state snubbed a massive military parade on Red Square for the 70th anniversary of victory over Nazi Germany.

In a conciliatory gesture, Merkel paid tribute to the Soviet dead by standing side by side with Putin as she laid a wreath at the tomb of the Unknown Soldier by the Kremlin walls.