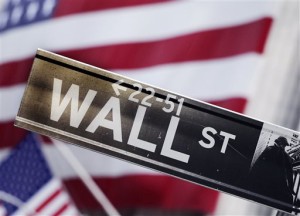 Wall Street has fallen along with markets across the Atlantic, as a sell-off of bonds spreads to stocks.

The Dow Jones closed 37 points or 0.2 per cent lower at 18,068, recovering from worse losses earlier in the session.

With no significant economic data being released, US traders were swayed by broad losses around the world.

A speech by San Francisco Federal Reserve president John Williams may also have weighed on sentiment, as he declared there is a limit to how long the central bank can wait before raising US interest rates.

The energy sector was the only bright spot, having been the heaviest sold sector yesterday, as West Texas crude oil rose 2.5 per cent, back up to $US60.67 a barrel.

The market losses were significantly heavier in Europe.

The Athens Stock Exchange was one of the only exceptions, closing up 1.4 per cent on the news Greece met its massive debt repayment due this week.

The Australian dollar rose overnight against all the major currencies; and at 8am was buying around 79.9 US cents, 71.2 euro cents, 50.9 British pence and 95.7 Japanese yen.

Spot gold was trading at $US1,193 an ounce and iron ore weakened a fraction overnight to $US62.30 a tonne.