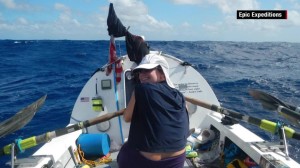 Sonya Baumstein recites the mantra she’ll likely be telling herself often over the next 4 to 6 months.

The 30-year-old Orlando, Florida, native has just begun a journey of record-breaking proportions: She is rowing 6,000 miles alone from Choshi, Japan, to San Francisco, California — without a support vessel.

Why? Because she “likes the challenge.”

Baumstein is no stranger to challenges. In 2012, she biked from Mexico to San Francisco. In 2013 she used a standup paddleboard to travel across the Bering Strait. And in the winter of 2011, she rowed 2,600 miles with three male rowers from Spain to Barbados.

Although Baumstein likes any extreme adventure, rowing holds a special place in her heart.

She started rowing at Winter Park High School in 9th grade. Her high school coach was Mike Vertullo, who she describes as a “back-breaker.” His intense training saved her when she was hit by a car in college.

The accident ended her rowing career at the University of Wisconsin and cost here three years of knee surgeries and rehabilitation. But she says if she hadn’t been in such good shape, recovering from her injuries would have taken much longer.

“The level of fitness I was in, and my ability to stay at that fitness level and push myself there all the time, I attribute to that time on my high school rowing team,” she says.

Her 770-pound, 24-foot-long carbon boat is named “Icha” a shortened phrase in Japanese meaning “when we meet we’re family.” On the boat for her trip across the Pacific, Baumstein is carrying over a ton of food, a spare kit, three bags of medication and six oars, which will also serve as a safety line that she can grab on to in case she goes overboard.

Ideally, Baumstein will row 14 to 16 hours a day. But “I don’t think the ocean is necessarily an ideal place all the time,” she giggles.

Her journey is not just personal. She is also working with NASA’s Earth and Space Research program called “Aquarius.”

Geared with technology from Sontek YSI and Liquid Robotics, Baumstein will be collecting information on water temperatures, salinity levels and currents as she rows. Scientists will compare that data to satellite data already being recorded.

“My boat and this journey and speed is ideal for getting accurate data,” Baumstein says.

Baumstein is not the first person to row from Japan to San Francisco. In 1991, Gerard d’Aboville of France completed the journey in 134 days. In 2005, Emmanuel Coindre beat d’Aboville’s record by five days, according to OceanRowing.com.

Sarah Outen, the first woman who attempted the journey, had to cut the trip short twice after a tropical storm and strong currents dragged her way off course.

Baumstein acknowledges it would be “really cool” to be the first woman to complete the journey, but she also insists that the trip is just a “small thing” she’s doing as a “citizen scientist.”