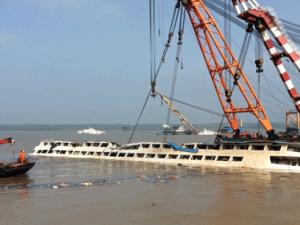 (AA) – The death toll from a cruise ship that capsized in China’s Yangtze River has risen to more than 300 people after two cranes righted the vessel.

Of the 456 people onboard when a freak tornado hit the vessel in central Hubei province Monday night, 111 remain missing, according to Jianli county’s rescue headquarters.

Authorities have said that 14 people survived. Some are reported to have jumped from the ship as it started to list and swam or drifted ashore, while three others were pulled from air pockets inside the overturned hull by divers after rescuers heard yells from inside.

The Eastern Star had been carrying around 400 passengers, five travel agency workers and 47 crew when it overturned.

Xinhua cited Liu Xiaowu, Guangzhou Military Area Command officer, as saying the interior of the hull had become the focus of rescue operations, and expressing hope that efforts would conclude in seven hours.

An extended area of the river is being scoured for survivors.

Relatives of those onboard have been requested to supply blood samples so their DNA can be used in identifying the victims.

Mortuaries workers in the nearby city of Yueyang, Hunan province, are on stand by with coffins and body bags, the agency reported the municipal government as saying.

One 58-year-old survivor said that he was holding hands with his wife in bed when the ship tilted, the bed falling and trapping her.

“I might have died if my wife had not let go of my hands at the last moment,” the China Daily reported Wu Jianqiang as saying Friday.

He said he loosened his grip, and was then pushed outside by water as the ship turned over.

Wu was the first person to call the police after the accident.

Like most of those on board the multi-decked, 77-meter-long Eastern Star, Wu and his wife were retirees who had joined the ship in the eastern city of Nanjing on May 28 for an 11-day trip journey to Chongqing Municipality on the upper reaches of China’s longest river.

Xinhua has reported the ship’s captain and chief engineer, who both survived the incident, as saying that the boat sank “within one or two minutes” of being caught in a tornado.

It is expected to become China’s deadliest shipping accident in seven decades.

Divers’ attempts to retrieve survivors had been hampered by zero visibility in the muddy water of the river, along with the intricate layout of the vessel, and strong winds and heavy rain.

Adding to complications was that the escape of any air trapped inside the hull during the rescue mission could have caused the ship to lose what buoyancy it had and to sink deeper.

The ship’s captain and chief engineer are now in police custody.

China’s president and Communist Party leaders have demanded a serious investigation into the cause of the incident.

EU’s Juncker says Italy is at the heart of Europe, deserves respect