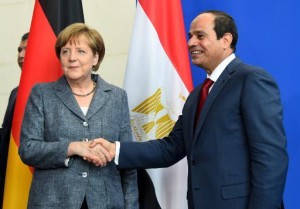 (AA) – Egyptian President Abdel Fattah el-Sisi has invited German companies to invest in his country, during a meeting with representatives of largest German manufacturing companies in Berlin on Thursday.

El-Sisi met members of Federation of German Industries, or BDI, over a breakfast on the final day of his two-day official visit to Berlin.

“German government has received el-Sisi on the highest level without setting any preconditions, despite a hundred new death sentences imposed recently on opposition members. This attitude would encourage el-Sisi to continue his course,” Christine Buchholz, lawmaker of the main opposition Left Party said on Wednesday.

The German government has dismissed calls by opposition parties to cancel the visit of el-Sisi and argued that high-level talks with Egypt’s president would provide an opportunity to also discuss the human rights situation in the country.

But Chancellor Angela Merkel refrained from a strong criticism of human rights abuses during a joint press conference with el-Sisi, after their meeting on Wednesday.

She only called on el-Sisi not to carry out death penalties imposed on Muslim Brotherhood leaders and opposition members.

Leading international human rights organizations, including Amnesty International and Human Rights Watch, had urged Merkel Monday to raise human rights violations with el-Sisi and demand release of all prisoners detained in what they deem to be politically motivated trials.

The groups said that at least 41,000 people were detained between July 2013 and May last year in Egypt. Amnesty said more than 742 death sentences have been passed against alleged Muslim Brotherhood supporters since Morsi was overthrown.

Egypt’s first democratically elected President Morsi was ousted in mid-2013 by the Egyptian army, which was headed at the time by el-Sisi.

2 hats are better than 1: Mendoza happy with ESPN, Mets role

Over 200 migrants drown in 3 days in Mediterranean