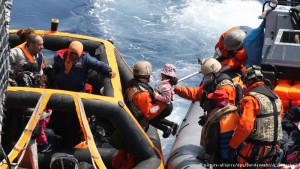 The rescues took place in 30 operations spanning 48 hours, launched after travelers sent distress signals using satellite phones. Federico Fossi, a spokesman for the UN High Commissioner for Refugees (UNHCR), said there had been 10 distress calls within a few hours on Sunday.

A total of 3,480 people were rescued on Saturday while 2,371 were brought to safety a day later. The German military said it had destroyed several boats after rescuing nearly 1,400 migrants, since the vessels were causing obstacles in shipping lanes.

Asylum seekers were initially being taken to Italian ports, creating tension between the government and local opposition party politicians who said they were unwilling to welcome any more refugees.

Roberto Maroni, the Northern League president of the Lombardy region, said he would not shelter any more migrants and would cut funding to cities that agreed to host them.

According to the UNHCR, more than 46,500 migrants have arrived in Italy by boat since the beginning of the year, a 12 percent increase on the number of refugees in the same period in 2014.