The EU’s top regulator for insurers and pension funds, the EIOPA, wasn’t kidding when it warned that the ECB’s €60-billion a month money-printing and bond-buying binge was triggering treacherous “volatility” in the bond markets. “Volatility” isn’t actually the right word. It implies ups and downs. But since QE started in March, euro sovereign bonds have experienced a brutal rout, interspersed with brief periods of calm just long enough for investors to lick their wounds, followed by a brutal rout yesterday and today.

On Tuesday, ahead of the ECB’s policy announcement today, German Bunds sagged, and the 10-year yield soared from 0.54% to 0.72%, drawing a squiggly diagonal line across the chart. In just one day, yield increased by one-third!

Makes you wonder to which well-connected hedge funds the ECB had once again leaked its policy statement and the all-important speech by ECB President Mario Draghi that the rest of us got see today.

Investors who’d bought into the ECB’s deflation hype and into the panic instigated by inflation-loving mainstream economists – including the folks at the IMF – and that the ECB would have to expand its QE program, and that interest rates would drop ever deeper into the negative to where everyone would eventually be paid to borrow money, well, those gullible investors who bought these bonds late last year or early this year, or even during the dip last week, they’re now getting their clocks cleaned.

In April and early May, the rout produced losses of €344 billion on Eurozone-government bonds alone, according to Bloomberg. Corporate bond investors pocketed additional hefty losses. On a global basis, that first phase of the rout entailed $450 billion of losses. And this second phase of the rout adds to them. Deflation panics do that to gullible fixed-income investors.

In his prepared speech, Draghi padded himself on the back for destroying savers and all kinds of other folks by imposing a negative deposit rate of -0.2% and initiating the €60-billion-a-month QE scheme. They’re already performing miracles on a daily basis.

“The monetary policy measures we have put in place will support further improvements both in borrowing costs for firms and households and in credit flows across the euro area,” he said. “Therefore, it will encourage both households to expand consumption and firms to increase investment today, thus reinforcing the current cyclical economic recovery.” Inflation has been roaring back to life too. And so he said, there’s no need to expand QE.

This must have popped a dream. But those hedge funds in the loop by yesterday morning had already started selling their holdings yesterday, or shorting what they hadn’t already shorted. So the rout in response to today’s announcement started yesterday morning. Today the rest of the market chimed in.

This sort of thing is exactly what EIOPA, the insurance and pension regulator, had warned about in its 2015 Financial Stability Report, published on Monday: QE “substantially reduced market volume for some asset classes, which significantly increased volatility,” the report said. Among the risks: liquidity for these bonds “was dramatically reduced which in turn has caused an increase of volatility.”

Its chart below shows how volatility has inched up last year as rumors about an upcoming QE program were running rampant, then how volatility soared starting in January when the ECB officially announced QE, and how it skyrocketed when QE actually started in March (DE = German): 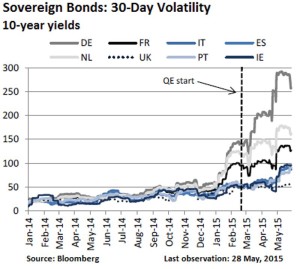 The chart is as of May 28, and doesn’t include the bloodletting of the last two days, which would likely take the volatility measure of the German 10-year yield above 350.

“An unusual public warning from an official EU body about the impact of the ECB’s actions on investors,” is what the Wall Street Journal called it, adding, “The ECB declined to comment.”

The bitter irony: Rumors of QE drove up bonds (and European stocks too!) all last year. The ECB’s January announcement of QE inflated bonds even more, with yields plunging to ludicrous levels. But upon the ECB’s actual kickoff of QE, bonds did the opposite of the expected: they sagged, and yields soared.

So last week, the ECB rode to the rescue and announced that it would “frontload” QE ahead of the summer, which meant an additional short-term mini-QE. It stopped the bleeding for a few days, and bonds recovered some. Today the ECB popped the dream of an overall expansion of QE, and bonds got massacred.

This sort of bloodletting is not what the ECB had in mind when it announced its QE and negative deposit rate. Yields were supposed to go lower. Bond prices, along with stock prices, were supposed to rise. But for now, euro bond markets are spiraling out of its control. Turns out, just as they were front-running QE for over a year, they’re now front-running the end of QE. And the purposefully fattened, deflation-hype besotted bond investors are stewing in their losses.