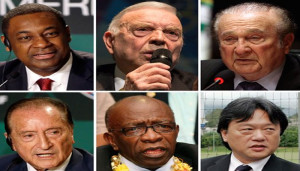 Interpol on Wednesday issued international wanted persons alerts for six former FIFA officials on the request of the US government. Interpol said on its website:

“At the request of US Authorities, Interpol Red Notices have been issued for two former FIFA officials and four corporate executives for charges including racketeering conspiracy and corruption.”

2 get life for 2010 Independence Day bombing