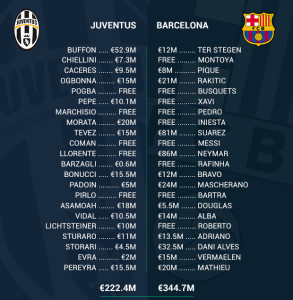 When Juventus and Barcelona face off in Berlin today Saturday’s Champions League final, it will be a clash of not just two differing football philosophies but also of opposite spending tendencies.

While many have pinpointed the contrasting styles of play as a key component of the European showpiece, it is fair to say the two clubs have already gone about constructing their first-team squads in very different ways.

Despite basing their side around a large pool of home-grown talent, Barca have spent huge amounts in putting together the squad which has already secured the Primera Division title and the Copa del Rey.

Xavi, Andres Iniesta, Lionel Messi and Sergio Busquets number among nine players trained in their own youth ranks who have gone on to be key members of their Champions League run. And yet for every local boy there is a big signing.

Luis Suarez’s €81 million move from Liverpool ahead of the 2014-15 season followed an even bigger and more controversial transfer involving Neymar 12 months earlier. The Brazilian cost €86.2m in the end, with the club admitting the full extent of their total spend on the ex-Santos player months after claiming the cost had been around €30m less.

Add in hefty fees for the likes of Dani Alves, Javier Mascherano and Ivan Rakitic and Barcelona’s squad value surpasses the €340m mark.

Over in Turin, the Bianconeri have spent significantly less on building a side to challenge in Europe, but they have laid out money for a far greater number of players in the process. Their cheaper €222m squad conversely includes only five players who cost the club nothing, with Claudio Marchisio the sole product of their youth system to have remained with them throughout.

The key is that they haven’t splashed out on nearly as many big-money signings, with only Gianluigi Buffon’s phenomenal €52.9m 2001 deal costing them more than €20m. Elsewhere around the squad, the Italian league and cup winners have been able to find top players for reasonable fees and have been topped up with free transfers for the likes of Paul Pogba and Andrea Pirlo.

The Champions League doesn’t come cheap these days, with mega money involved in building a side worthy of a final, but Saturday’s interesting clash of approaches suggests there is more than one way to construct a winning outfit.

Firefighters try to save relics as fire engulfs Rio museum