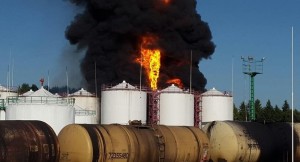 Several fuel tanks have caught on fire at an oil depot in the Kiev region, five people have been injured, Ukraine’s Emergencies Ministry reports.

The blaze, which erupted at a BRSM-Nafta oil depot on Monday evening, has affected eight fuel tanks, the ministry said in a Tuesday statement.

“As a result of the fire five people have been injured; they have been taken to Kiev hospitals with wounds of varying severity,” the statement added.

“As of 07:00 [04:00 GMT] on June 9, fire-fighting efforts continue, the fire has covered 8 tanks with a capacity of 900 cubic meters, as well as a number of smaller containers,” the statement said.

“As a result of the fire five people have been injured; they have been taken to Kiev hospitals with wounds of varying severity,” the ministry’s earlier statement said.

Over 300 people and more than 60 units of equipment are involved in extinguishing the blaze.

The oil depot is located in the village of Kryachky, about 40 kilometers (25 miles) southwest of Ukraine’s capital, Kiev.

BRSM-Nafta Ltd. is a Kiev-based company that supplies gasoline and diesel in Ukraine.

Germany says it has obtained files on Islamic State members

OPINION – Myanmar military and its coup

Turkish Vice President Fuat Oktay says it was most honorable day of struggle for...

No perfect ending to Wenger’s long rivalry with Man United