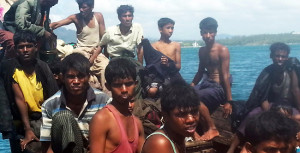 According to the Kom Chad Luek Thai daily, the group of refugees, comprising about 94 people, have cut electrical wires in the building where they are housed, and tried to break through locked doors and windows.

Around 50 policemen were present at the scene, the media outlet reported. The migrants were calling on Thai authorities to have them transported to Malaysia rather than the United States, and demanded permission to bring food into sleeping areas to feed their children at times they choose.

Thailand is preparing to send the Rohingya to the United States, according to a Washington-established quota on refugee acceptance. The refugees have been accommodated at a Thai Ministry of Social Development and Human Security facility. The migrants are being fed at a temporary dining room and are not allowed to bring food to the dormitories.

The Rohingya ethnic group comprises the largest part of the Muslim population in the Buddhist-majority Myanmar. Its members have been fleeing the country by sea to Malaysia, Indonesia and Thailand, often at the hands of smugglers, as they face persecution by their government.

US will not recognize Nagorno-Karabakh’s elections