A record-breaking attempt to cross the Pacific Ocean using a solar-powered plane has been aborted.

Poor weather conditions are forcing the Solar Impulse craft to head back to Japan to land.

The pilot was 36 hours into what was expected to be a six-day journey from China to Hawaii.

The team will now wait in Japan for clearer skies before attempting to continue.

Bertrand Piccard, who has been watching the flight from mission control, in Monaco, said: “We are not daredevils, we are explorers.

“We have to put safety at the top of all of our priorities.

“Everyone is very happy with the plane – but the weather does not fit.

“We land in Nagoya and we wait for better conditions to continue.”

This is the seventh leg in an attempt to circumnavigate the globe using just the energy of the Sun.

The experimental craft, which is covered in 17,000 solar cells, took off from Abu Dhabi in March.

The Pacific crossing, however, was always going to be the most challenging part of this epic journey.

The team has already had to wait for a month in Nanjing for the right weather conditions.

The plane not only needs favourable winds to push forward, it also needs cloud-free skies during the day to soak up enough energy from the sun to enable it to fly during the night.

The team’s meteorologists thought they had identified a suitable weather window – and the plane set off at 18:39 GMT on Saturday.

Swiss pilot Andre Borschberg, who is flying solo, had been making good progress, however in the early hours of Monday morning, the Solar Impulse team announced it was putting the plane in a holding pattern while they assessed a worsening forecast. 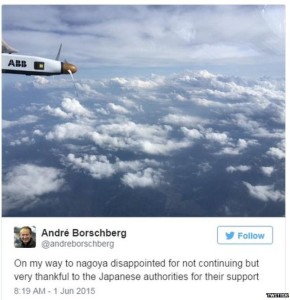 The pilot was asked to circle over the Sea of Japan while meteorologists assessed whether they could find their way through a worsening weather front close to Hawaii.

They have now decided not to proceed. Past a certain point, if anything goes wrong, the only option is for the pilot to bail out into the ocean.

The team will now head to Nagoya airport and wait for another weather window.

The fear is that further delays could have an impact on later stages of the flight.

Ideally, the team needs to cross America, and then the Atlantic, before the hurricane season starts to peak in August.

France should invest more in surveillance of space, minister says