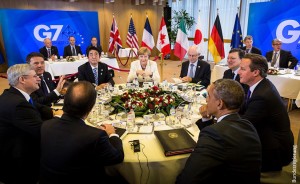 Leaders of the Group of Seven (G7) countries are set to discuss counter-terrorism efforts, health issues, climate change, female empowerment and development policy during the second and last day of the group’s 41st summit underway in Germany’s Bavaria.

The summit brings together leaders of Canada, France, Germany, Italy, Japan, the United Kingdom and the United States. Russia does not take part in the event for the second consecutive year after first joining the group in 1997.

Russia was high on the agenda of the first day of the summit as the leaders discussed the extension of anti-Russia sanctions and underscored the need to “stand up to Russia’s aggression in Ukraine.”

The Greek debt crisis was also one of the pressing issues debated during the summit.

In 2014, the G8 format became the G7 after other nations voted to suspend Russia soon after the Black Sea peninsula of Crimea rejoined Russia following a referendum, not recognized in the West.

The 2015 summit also features several African leaders who were invited to discuss fighting poverty and countering the Islamic State militant group and its affiliates Boko Haram, which operate across the Middle East and North Africa.

Allegri in his element as he plots Juventus comeback