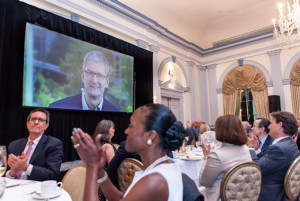 While speaking at the Electronic Privacy Information Center’s (EPIC) Champions of Freedom Awards Dinner yesterday night, Apple CEO Tim Cook gave a speech during which he addressed the ongoing issues that surround privacy in the technology space. Cook, who was not physically in Washington D.C. for the event but rather spoke remotely, commented on both the steps Apple takes at ensuring customer privacy and how other companies are failing at the same task (viaTechCrunch).

Cook first pointed out that there is no reason users should have to make tradeoffs between privacy and security and that it is Apple’s job to provide both in equal measure. He also took stabs at other “prominent” Silicon Valley tech companies and pointed out that many have built their businesses by collecting personal information from users.

Regarding the behavior of some of Apple’s competitors in comparison to its own, Cook had the following to say:

“I’m speaking to you from Silicon Valley, where some of the most prominent and successful companies have built their businesses by lulling their customers into complacency about their personal information. They’re gobbling up everything they can learn about you and trying to monetize it. We think that’s wrong. And it’s not the kind of company that Apple wants to be.”

Cook then stated that Apple believes the customer should be in control of their own information. Just because a service is free doesn’t make the privacy risks worth it, he claimed. Cook sideswiped Google’s new Photos services, which is free of charge and stated, “You might like these so-called free services, but we don’t think they’re worth having your email, your search history and now even your family photos data mined and sold off for god knows what advertising purpose.”

After addressing privacy concerns, Cook went on to talk about encryption and the steps Apple takes to ensure that the data of all users is protected. Cook stated that he sees the efforts of some members of the government as “incredibly dangerous” in their quest to access the private data of citizens. The Apple CEO said that the company has always offered encryption tools in its products and will continue to do so. Regarding the supposed back door access that many companies have given to the government, Cook pointed out that if you give a key to the government, a burglar can find it too.

“We’ve been offering encryption tools in our products for years, and we’re going to stay on that path. We think it’s a critical feature for our customers who want to keep their data secure. For years we’ve offered encryption services like iMessage and FaceTime because we believe the contents of your text messages and your video chats is none of our business. If you put a key under the mat for the cops, a burglar can find it too. Criminals are using every technology tool at their disposal to hack into people’s accounts. If they know there’s a key hidden somewhere, they won’t stop until they find it.”

Tim Cook has been very open in addressing Apple’s security policies over the recent years. Applelaunched a new security page on its website last year, which was accompanied by an open-letter from Cook himself regarding Apple’s policies. Cook spoke about cybersecurity at the White House Summit earlier this year, as well, and also during a German interview.

US to host counterterror summit amid attacks in West

War, hunger and a housing boom: welcome to Africa’s most crowded city