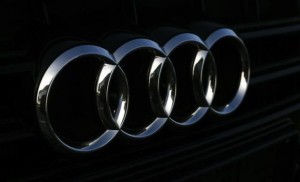 The fall in Audi’s sales in China may have eased in August, its chief executive said on Tuesday, but the luxury carmaker shied away from forecasting full-year deliveries in the biggest auto market, unlike German rivals BMW and Daimler’s Mercedes-Benz.

“We have once again quite good showroom traffic, at least as much as August is concerned,” Chief Executive Rupert Stadler told reporters at a briefing in Hamburg late on Tuesday.

“But one swallow does not make a summer,” the CEO added, refusing to give a forecast for full-year Chinese sales.

BMW and Mercedes-Benz, which in July outsold Audi on a global scale for a second month in a row, are more optimistic on China.

Mercedes-Benz, which slipped behind Audi in the global premium sales race in 2011, aims to benefit from a series of redesigned models to boost Chinese sales significantly beyond 300,000 vehicles this year from 281,588 in 2014 while BMW is expecting an unspecified single-digit percentage gain.

“We should now stay calm and wait for the undulation in China to subside,” Stadler said. Audi will publish August sales data on Thursday.