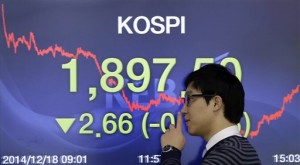 Asian cyclical stocks that move in line with economic trends are showing unusual resilience at a time of sluggish regional growth, in a sign that investors are taking on risk again.

The outperformance of these cyclical stocks against their defensive peers suggest the market’s recent correction on growth concerns will not turn into a bear market.

Cyclicals, typically in industries that do well in strongly growing economies, have risen since an Aug. 24 trough. Materials stocks <.MIAX0MT00PUS> are up 9.6 percent, and information technology shares <.dMIAP0IT00N> and consumer discretionary stocks <.dMISX0CD00N> are up 5.8 percent.

The outperformance of cyclical stocks is unusual given that Asia’s sluggish growth, earnings downgrades and weak consumer demand would typically prompt investors to dump them in favour of defensive shares.

That was indeed exactly what they did until late August. Materials stocks plunged 30 percent from an April peak to an August trough, and consumer discretionary shares fell 21 percent, while healthcare companies sank 13.6 percent and consumer staples dropped 8 percent.

However, that aggressive selling has made cyclical stocks so cheap they now appear to be good value, said Josh Crabb, head of Asian equities at Old Mutual Global Investors in Hong Kong.

“Cyclicals have been beaten up and the market is pricing them like they’re never going to turn,” Crabb said. “That’s why they’re now turning.”

Information technology and healthcare stocks are trading at around three times book value, while cyclicals are at half or less, Thomson Reuters DataStream data shows.

The gap, while narrowing, remains near levels seen during the 2008 global financial crisis, according to Credit Suisse.

That’s a shift from the usual pattern of equities bottoming 1 to 1-1/2 years before an improvement in fundamentals.

Manishi Raychaudhuri, Asia-Pacific equity strategist at BNP Paribas, said that an across-the-board recovery was unlikely, however.

For instance, while software and service providers, particularly in India, appear robust, hardware and component manufacturers are facing increased competition and falling demand. BNP has reduced exposure to the latter, he said.

“In a contrarian sense, it’s a good time to be thinking about these things,” said Managing Director Hugh Young in Singapore.

Companies such as Australian miner Rio Tinto <RIO.AX> “still make a decent amount of money, even with their key commodity having collapsed,” he said.

Not everyone is seduced by the valuations, however.

Cyclical stocks, such as materials, shipbuilding, mining and metals, “have been plagued by excess investment/capacity,” Peter Sartori, head of Asian equities at Nikko Asset Management in Singapore, said.

Russia to Sell Gas to Ukraine at $378 Per 1,000 Cubic Meters in November-December