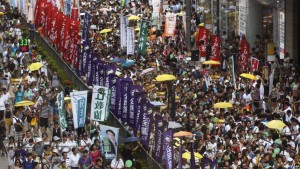 Hong Kong police patrolled the area around government buildings ahead of rallies planned later on Monday to mark the first anniversary of pro-democracy protests that crippled parts of the Chinese-controlled city.

Police will be on alert to avoid a repeat of last year when protesters streamed on to major highways in a push for full democracy, demonstrations that became the biggest political challenge to Beijing’s Communist Party leaders for decades.

Metal barriers were stockpiled in key locations, including government headquarters and near the office of Hong Kong leader Leung Chun-ying, although activists said they had no plan to re-occupy streets in the financial centre and crowds are expected to be relatively small.

Last year’s 79-day protests failed to persuade China to allow a fully democratic vote for the city’s next leader in 2017, instead of from a list of pre-screened, pro-Beijing candidates, but many say the demonstrations triggered a political awakening.

Leaders of the Occupy protests are expected to appear at various rallies, including a moment of silence just before 1000 GMT (6 pm local time) to mark the time when police fired volleys of tear gas to disperse demonstrators.

Dubbed the Umbrella Movement for the umbrellas protesters used to defend against tear gas, the unrest was the worst since China took back control of Hong Kong from Britain in 1997.

On Saturday, a poster of Jesus Christ in a flowing robe carrying a yellow umbrella was hung on a wall in a covered walkway outside government headquarters, christened the “Lennon” wall during the protests as a tribute to John Lennon. There was also a painting of a student being crucified on a yellow umbrella.

The anniversary comes as recent comments from Beijing’s top representative in Hong Kong have reignited fears about the Chinese central government’s expanding influence in the city.

The mainland official, Zhang Xiaoming, said this month Hong Kong’s chief executive had a “special legal position” above the executive, legislative and judicial institutions, suggesting Leung was above the law.

The former British colony returned to Chinese rule under a “one country, two systems” framework that gave it separate laws and an independent judiciary but reserved ultimate authority for Beijing.

Hong Kong has enjoyed a reputation as a bastion of legal independence compared with the mainland, though there has been concern in recent years about a politicization of the judiciary.