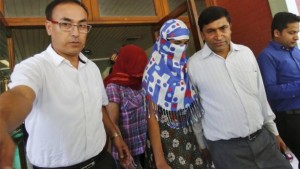 India has urged Saudi Arabia to cooperate in investigations into rape allegations against a diplomat.

Two Nepali women, aged 30 and 50 working as maids at his home near the capital Delhi, say they were starved and sexually abused by him and other Saudi nationals.

The women returned to Nepal on Thursday.

The Saudi embassy has denied the charges. The official has diplomatic immunity and is in the embassy.

Police have registered a case of rape, sodomy and illegal confinement against the official, without naming him.

The alleged abuse to which they were subjected took place over several months at the apartment in Gurgaon, south of Delhi.

The women were rescued from the house on Monday after a tip-off from an NGO.

“We thought we would die there,” one of the alleged victims told the AFP news agency.

“The apartment was on the 10th and 12th floor, there was no way we could run. We were abused every day.”

Meanwhile, women rights activists have protested outside the Saudi embassy in Delhi demanding the arrest of the accused diplomat.

Indian media reports say that the allegations have led to a “diplomatic crisis” between India and Saudi Arabia.

“The case has put Indian diplomacy in the spotlight as the victim and the accused are of different nationalities,” The Hindu newspaper reported.

“Nepal has a special relationship with India…On the other hand, the government would rather not strain ties with Saudi Arabia where three million Indians live and work. Saudi Arabia has been India’s largest provider of oil since 2001,” the newspaper said.

Thousands of men and women from Nepal, one of the world’s poorest countries, travel to India and other Asian and Arab states every year to seek work as domestic servants and labourers.

Nepal ambassador Deep Kumar Upadhyay told the BBC that they had no idea that a Saudi diplomat was involved when they set out to rescue the two women, adding that they were now seeking a diplomatic solution to the issue.

German train drivers to go on strike again from Saturday