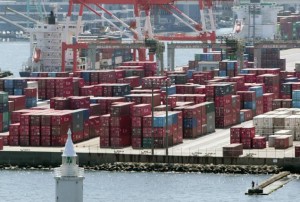 Japanese exports are forecast to have risen at a slower pace for the second straight month in August, pressured by weakening demand across Asia as China’s economic slowdown takes a toll on export-growth engines in the region.

Exports were expected up 4.0 percent last month from a year ago, a poll of 22 analysts found, slowing from a 7.6 percent gain in July and a 9.5 percent jump in June.

“Shipments to Asian nations remain weak…there is no change to the trend of exports which is still sluggish,” said Tatsushi Shikano, deputy chief economist at Mitsubishi UFJ Morgan Stanley.

“At the moment, we expect the economy will grow in the current quarter but the rebound from the previous quarter may be smaller than previously thought.”

A slowdown in China, which has recently shown signs of deepening and roiled global financial markets, has knocked export-led economies including Taiwan, South Korea and Singapore.

Other economies like Australia and New Zealand have also been hit, with Japanese manufacturers hit by double-whammy of weak global demand and sputtering domestic consumption.

That has markets expecting more stimulus from the Bank of Japan as the world’s third-biggest economy struggles to get back on track after a second quarter contraction. Analysts expect only a modest economic recovery in June-September.

At its meeting next week, the BOJ is expected to offer a bleaker view on overseas economies and may lower its assessment on the country’s exports, sources familiar with the matter told Reuters.

The poll found imports declined an annual 2.2 percent in August, down for eight straight month due to price falls in crude oil and liquid natural gas.

The trade deficit is seen widening to 541.3 billion yen ($4.48 billion) in August, versus 268 billion the previous month, which would be a fifth straight monthly trade deficit.