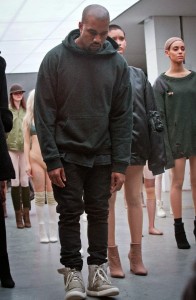 Kanye West has presented his third catwalk show, and if he is trying to slip quietly into the New York fashion week schedule like any other designer, he has some way to go.

The drama began on Wednesday on the pavements outside, where 200 fans jostled with fashion buyers and editors in the 30 degree heat for half an hour after the show was supposed to start.

Meanwhile, street-style photographers and eager fans in Yeezy T-shirts erupted with screams of “oh my god” as a series of 4x4s with blacked out windows deposited celebrities – Drake, Courtney Love, Lorde – while seasoned industry types tutted at the fuss.

It was frenetic inside, too, where rap superstars rubbed shoulders with caramel-haired Kardashians. The placement of Kanye’s wife, Kim, next to Anna Wintour, showed that West fully understands where the industry’s power base lies. The rap star’s daughter, North West, sat on her mother’s lap, occasionally shouting: “Mummy, mummy.”

As was the case last season, the show was choreographed by the artist Vanessa Beecroft, and its models were a variety of shapes and sizes – some might even pass for curvy in the fashion industry, if not in the outside world. They were arranged into four military squadrons, with one model in each group playing sergeant major ordering the others to march. With models’ racial diversity a hot topic in the industry, it was interesting that West divided his warring factions by colouring, with the whitest and blondest walking together first.

The clothes were a continuation from last season: sporty garments layered on top of each other, with hoodies under jackets and over peaked baseball caps and form-fitting leggings and leotards, in a palette that ranged from sand to brown to khaki.

Ostensibly, this presentation was all about West’s Yeezy Boost Adidas trainer range, although only a few pairs actually appeared. Really, the mesmerising staging stole the show. At the end, all of the models came on to the catwalk, filling every space and staring straight ahead like worshippers of a cult. In the middle, one male model fidgeted and smoked a cigarette while the others stared blankly ahead – no one had any idea whether this was part of the performance.

West has received a lot of stick for his fashion ambitions in the past. His first show, in 2011, was savaged by critics. The kindest described it as “a love letter to fashion” (read: derivative), while some went as far as to call it a “stupendously vacuous enterprise”. The industry can be particularly unforgiving of celebrity designers, because any suggestion that fashion is easy – that success can be as simple as slapping the right name on a T-shirt – is a bad look for the business as a whole. To his detractors, his ambitions also seemed to be further evidence of an out-of-control ego.

By the time West released his second collection earlier this year, he had worked hard to woo the industry as it expects to be wooed: slowly and with reverence. Now he is firm friends with head honchos like Givenchy’s Riccardo Tisci and Wintour, and his collections have been received far more favourably. Last season’s leotards and wrinkly tights felt like a post-apocalyptic Flashdance – a look he later said had been inspired by the London riots.

Of his efforts to break into the industry, he recently tweeted: “I have encountered countless amounts of bigotry along the way … fame is often looked down upon in the design world, so it’s actually been something I had to overcome.”

He’s definitely getting there. How he will combine his burgeoning fashion career with campaigning to be president, though, is anybody’s guess.

Toyota speeds up electrified vehicle schedule as demand heats up