Last week’s season premiere ended on a solid cliffhanger: Rick’s plan to deal with a herd of walkers crowding a rock quarry near Alexandria by guiding them away from town was disrupted by a blaring horn that drew the zombies in the exact wrong direction. This raised two important questions—how could Rick and his team salvage the situation, and who the hell was honking the horn? While the answer to the former was more immediately pressing, the answer to the latter could have undermined Rick’s apparent dominance of the group. The sound was coming from Alexandria. What had he overlooked? What crucial element had he missed, an element that now threatened everything he was trying to achieve?

We’ll have to wait till next week to learn if the Great Zombie Walk ended disastrously or not; “JSS” sticks exclusively to the chaos in town, although Morgan (who’d been with the herders) shows up at the halfway point. But we do find out what was making all the noise, and, in its way, the answer confirms all of Rick’s darkest suspicions. The horn is just a side effect of a sudden and brutal assault by the Wolves, an assault that leaves many of the locals dead, exposing once again how under-prepared the Alexandrians are for the world they now live in. Aaron manages to take out some of the group, but in the end, it’s Carol and Morgan who do most of the work. Deanna, seeing what’s being asked of her, turns her back on the fighting and hides, and you can’t really blame her for it. Some people just aren’t cut out for this level of violence.

So again we see how crazy Rick is essentially correct, which mitigates his craziness. At heart, The Walking Dead is really only interested in one theme: what do you have to become to survive in a world like this one? It’s an issue that’s come up again and again over the years, and the inherent limitation of that theme is the one thing, at least for me, that keeps the show from achieving true greatness. It’s a such narrow, single-minded question, and it’s one that sheds no greater light on anything—given the dictates of a popular narrative TV show, one that has no set end date and only a handful of story tricks it can use, the inevitable will always be just that; and anyone who pretends otherwise, apart from Rick and a few others, will eventually suffer for their hubris.

Putting that aside (and the fact that I still do enjoy the series despite my reservations with its core ideals is a pretty strong mark in its favor already), The Walking Dead is more than capable of delivering great individual episodes, or even great runs of them. “JSS” is a great episode, opening with dread, achieving a pitch of horrifying chaos at about fifteen minutes in and then committing to that chaos until the very end. It’s thrilling and terrifying and packed with the sort of character defining vignettes that the show has gotten so, so good at doing.

Like the story of Denise, who takes over for Pete as Alexandria’s town doctor. Denise is, unsurprisingly, in over her head; she’s actually a psychiatrist, and although she did go to medical school, she hasn’t studied actual medicine in years. So of course today is the day when everything goes to hell, and she finds herself operating on someone with internal bleeding. She does her best, the patient dies, and Tara reminds Denise to stab the head, to keep the body from turning. The arc is short and brutal and goes exactly in the direction you’d expect it to, but the tragedy of it—and the fact that this will not be a singular event, and the hope that Denise might even settle into her work—keeps it fresh.

There’s also Carl, left to protect Baby Judith. Carl needs a damn haircut, and it’s hard to read exactly what’s going on behind his vacant stares, but this time out, he briefly bonds with Enid before saving Ron’s life. Nothing major; he’s mainly in the episode so Enid can leave him a message before she leaves for good, clarifying the “JSS” initials she kept writing during the episode’s (terrific) cold open. “Just Survive Somehow” the message says, and as statements of that theme I mentioned above go, it’s borderline humane. Most of the time, The Walking Dead is about how no one can ever be hard enough to really last, that warmth and mercy and decency are weaknesses that will get you killed. But the weariness in that “Just” feels a little more complicated. It’s not your fault if you die, the message says, and it’s not your fault if you live.

The hour’s centerpieces are the reflecting arcs of Morgan and Carol, both demonstrating the extent of their worldviews and the limitations therein. Carol is her awesomely pragmatic self, shifting from undercover homemaker (who offers to teach one of the locals how to make pasta, provided the local not smoke in the house because it’s a filthy habit that will get her killed) to undercover warrior almost as soon as the crisis hits. Her shift is marked by a terrific perspective shot of the Wolves arrival in town: Carol’s watching the woman she spoke to before smoking outside, and then someone comes in behind the woman, cutting her down with a machete. It’s fast and mean and there’s no warning whatsoever, and as much as anything in the episode, sells how unprepared anyone was for the attack.

Carol then proceeds to dress up like a Wolf herself, shooting any of them foolish enough to get close, and showing absolutely no mercy. This in distinct contrast to Morgan, who treats mercy the way a drowning man treats air; with staff in hand, he begs the attackers he finds to leave town and never come back, not to protect himself but to save their lives. At one point, he even ties a Wolf up instead of killing him, only to have Carol walk up and shoot the prone figure in the head without hesitation. It doesn’t get much starker than that.

That starkness (and the great way the episode is directed and edited; there’s a cut in the cold open, from Enid listening to her parents arguing about a car battery, to Enid trapped in the car with blood covering the window, that’s one of the best this show has ever done) is what makes this so good. But what makes it great is that the starkness is modulated. Carol lectured the other woman about cigarettes, but at the end of the attack, Carol finds a pack next to the woman’s corpse, and takes one out; not smoking it, but considering, even as she tries to wipe the bloody W from her forehead. (Noting the red Alexandrian “A” on the stair railing.) Carol is one of the most efficient realists on the show, but she isn’t a machine. Even she has her softer moments.

And Morgan, who tries so hard to keep his hands clean—well, he can’t manage that forever, no matter how hard he tries. After staring down a group of Wolves and forcing them to leave town without killing one of them (although he does kick a few asses), Morgan gets ambushed by a lone assailant. They fight, and Morgan ends up killing him. Weirdly, this makes Morgan’s philosophical approach to life, his seemingly quixote need to avoid killing, more tenable. It’s not that Morgan won’t kill. It’s just that, unlike Carol or so many others, he still thinks it’s worth trying not to. Odds are this won’t save him in the long run, but it’s good enough to make him worth rooting for now.

British author Rowling says Trump has a right to be bigoted 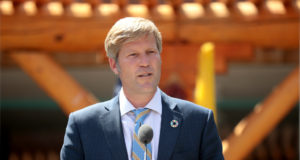