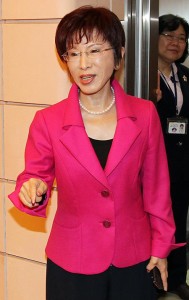 Taiwan’s ruling Kuomintang (KMT) party has dropped its candidate for the island’s presidential election in January.

She will be replaced by the party’s chairman, Eric Chu.

Before the decision, the two favourites for the presidential poll were, for the first time, both women.

Ms Hung, the deputy parliament speaker, was her party’s first female candidate. The opposition Democratic Progressive Party (DPP) candidate is Tsai Ing-wen, who lost in the presidential race in 2012.

Taiwan has never had a female president.

Ms Hung’s approval ratings were lagging far behind those of Ms Tsai – partly because she had lost support by advocating stronger ties with China at a time when some Taiwanese voters are wary about the island becoming too close to Beijing.

That led many people in her party to worry that the KMT would lose not only the presidential race but its majority in the parliament during the legislative race to be held at the same time, our correspondent says.

She adds that Mr Chu, the mayor of suburban New Taipei City who is considered a moderate on China, has more experience in governing, leading many party members to hope he will stand a better chance against Ms Tsai, despite his late entry in the race.

Outgoing President Ma Ying-jeou resigned as party chairman after the poll, which was widely seen as a rejection of his push for close ties with Beijing.

Hamas appeals for safety of Palestinians in Syria