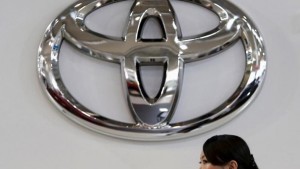 Toyota Motor Corp <7203.T> said it would aim to bring to market cars that can autonomously change lanes, merge with traffic, and overtake other vehicles on highways by around 2020 as it aims to catch up in the nascent field of self-driving cars.

Demonstrating its newest safety technology features to media on Tuesday, Japan’s biggest automaker said in that car of the future, drivers would be able to turn on and off the auto-pilot mode with a single switch.

The face-lifted Crown sedan unveiled in the domestic market last week was the world’s first car to use ITS technology, Toyota said. The fourth-generation Prius hybrid, due for launch in Japan at year-end, will be among the three models, it said.