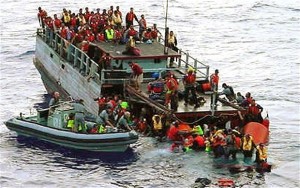 Australia was criticised on Monday at the United Nations for its offshore processing of asylum claims, detention of child migrants and reports it had sent back legitimate refugees.

Sterilisations of the disabled and discrimination against indigenous people were other concerns raised during the U.N. Human Rights Council examination of Australia’s record, part of a regular review of each U.N. member held every four years.

Successive Australian governments have vowed to stop asylum seekers from reaching the mainland, sending those intercepted on unsafe boats to camps on Christmas Island, and more recently Manus island in Papua New Guinea and Nauru in the South Pacific.

Australian opposition politicians demanded on Monday that the government disclose the extent of destruction caused by riots at an immigration detention centre on the remote Australian outpost of Christmas Island following the death of an asylum seeker.

“No asylum seeker who engages our (international) protection obligation is ever returned to a situation of danger,” said Andrew Goledzinowski, ambassador for people-smuggling issues in the foreign ministry. No one had died trying to reach Australian shores over the past 18 months.

Some 2,044 people are currently in immigration detention, including 113 children, “down from a peak of 2,000 (children) in middle of 2013”, said Steve McGlynn of the immigration and border protection department. A further 30,000 migrants were “approved to live in the community”.

Denmark’s delegation voiced concern at “the high percentage of Aboriginal children between the ages of 10 to 12 years held in detention centres”.

Canada urged Australia to “prohibit the non-therapeutic sterilisation of any individual who is not mentally competent to consent” while Brazil decried “the poor living conditions of indigenous peoples and their over-representation in the criminal justice system”.

“We acknowledge and recognise challenges remaining for Australia that have been flagged, including in relation to indigenous issues, migration issues, the rights of people with disability as well as human trafficking issues,” Reid said at the end of the debate.

EU migration chief in Pakistan after rejection of deportee deal