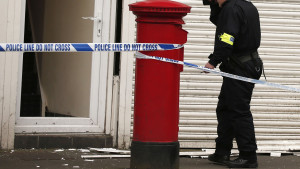 Four men arrested in the UK following an international counter-terrorism operation will appear in court later to face extradition proceedings to Italy.

The men, aged 32, 33, 38 and 52, were arrested on European Arrest warrants at addresses in Derby, Birmingham, Hull and Sheffield respectively.

The arrests on Thursday were part of an operation led by Italian authorities, which included raids in six countries.

All four men are due to appear at Westminster Magistrates’ Court.

The men were part of raids in several European countries connected to a suspected “jihadist network”, Rawti Shax, which is said to be seeking to establish a caliphate in Iraq’s Kurdistan region.

The group was allegedly plotting to free its leader, Mullah Krekar, who is in detention in Norway.

Suspects were also arrested in Italy and Norway, while authorities in Italy, Germany, Finland, Norway, Switzerland and the UK also searched a total of 26 properties.

The BBC’s security correspondent Frank Gardner says there is no suggestion any of those arrested were planning attacks in the UK.

Their focus appears to have been in the Middle East, he added, with the investigation aimed at breaking up an international recruiting pipeline that was sending jihadists to join the Islamic State and Al-Nusra organisations – both proscribed terrorist organisations – in Iraq and Syria.

Eurojust, the EU agency which co-ordinated the European raids, said suspected leaders and several members of the group were arrested during simultaneous activity in the six countries.

It added: “The arrested persons are charged with international terrorism.”

The operation, which follows several years of work by investigators, was launched under the direction of the Public Prosecution Office in Rome.

Mullah Krekar went to Norway as a refugee in 1991 from Iraq and founded radical Islamist group Ansar al-Islam, although he later tried to distance himself from it.

Norwegian authorities have been trying to deport him since 2003 after deeming him a threat to national security.

Eurojust said Rawti Shax, or Didi Nwe, meaning the “new course” or “towards the mountain”, represented an “evolution of Ansar al-Islam”, which is listed by the UN as a terrorist organisation affiliated with al-Qaeda.

It says the group has a “primary objective” which is to “violently overthrow the current Iraqi Kurdish government and replace it with a caliphate governed by Sharia law”.

It also alleged that the group was active in providing logistical and financial support for the recruitment of foreign fighters to be sent to Syria and Iraq, and also had the intent of training them for a future conflict in Kurdistan.

Germany’s Sept election and why it matters to markets