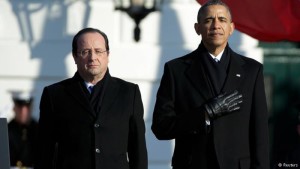 President Barack Obama will stand in solidarity with French President Francois Hollande at the White House on Tuesday, less than two weeks after the Islamic State group launched a series of deadly attacks in Paris.

But Hollande is likely to leave Washington without firm backing for his call to bring Russia into a new coalition to fight the extremists.

Hollande’s visit to Washington is part of a diplomatic offensive to strengthen the anti-Islamic State group campaign. The militants are believed to have been behind the Nov. 13 attacks in Paris, as well as separate attacks in Lebanon and Turkey and the downing of a Russian airliner in Egypt.

As the Islamic State group expands its reach, Obama faces increased pressure to ramp up U.S. efforts against the militants.

Italy begins voting for next president with unclear slate