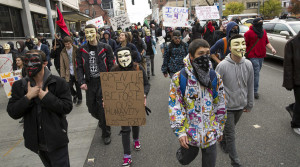 Nearly all of the protesters arrested at an anti-capitalist march in central London have been bailed.

Fifty people were arrested during the Million Mask March on Thursday which saw crowds gather wearing the “Guido Fawkes” masks of the Anonymous group – on 5 November.

Of those arrested, 48 have been bailed.

One person has been charged with assaulting a police officer and possessing a class B drug and the other cautioned for police assault.

Promoted as a peaceful march against capitalism, the march resulted in three police officers being taken to hospital, six police horses being injured and a police car set alight.

During the event the Met Police reported some protesters threw bottles at officers and fireworks and flares were also set off.

Some protesters were also treated for injuries and were given first aid at the scene.

The annual Million Mask March, organised by Anonymous, is held in a bid to hit back at austerity measures and perceived inequality brought about by the government.

One activist, who gave her name as Lola, said she had travelled from Hull to the capital to speak up for others.

“There are people who aren’t represented; they should be here,” she said.

Thai party fighting for survival after gaffe with princess