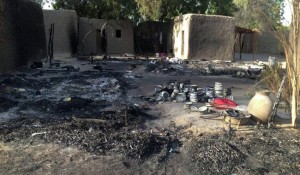 At least six people were killed and 30 injured in northern Cameroon on Wednesday by two Islamist suicide bombers at a Muslim funeral gathering, two officials in the region said.

The attackers were from Boko Haram, the group based in neighboring Nigeria that has stepped up cross-border attacks in Cameroon’s far north despite the setting up of a roughly 9,500-strong regional military task force.

One of the officials said the attack in Nguetchewe, about 10 km (6 miles) east of the Nigerian border, is the first known Boko Haram strike in Cameroon at a funeral gathering, although the militants have made an attack on a baptism in the past.

The U.S. military refers to Boko Haram as the “most lethal” extremist group in the world and thousands are thought to have been killed during their more than six-year insurgency.