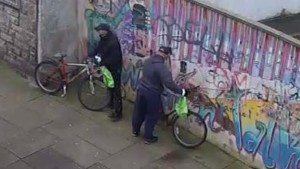 Police in Fife have released CCTV images of two men they want to trace in connection with an armed robbery.

Money was stolen from the TSB bank on Dunearn Drive in Kirkcaldy on 29 January at about 10:40.

The first man is white, in his late 20s or early 30s with dark stubble, and wearing a dark coloured baseball cap and dark clothing.

The second man is also white, 5ft 9ins tall, around 30 years old, of medium build and with stubble.

He also wore dark blue jogging bottoms with a distinctive white coloured motif on one leg. Officers want to hear from anyone who is able to identify the brand of this clothing.

Police say the two men shown in the CCTV may be able to help with their investigation and would ask any member of the public who recognises them to come forward.

Both men were seen riding bicycles on Alford Avenue in Kirkcaldy around the time of the incident.

Det Insp Colin Robson, of Kirkcaldy CID, said: “The public response to our recent appeals has been tremendous and I’m grateful to everyone who has contacted police.

“We continue to pursue various lines of inquiry in relation to this extremely serious offence. The public can rest assured that all information received will be acted upon.”

‘UFO’ in Congo jungle turns out to be internet balloon