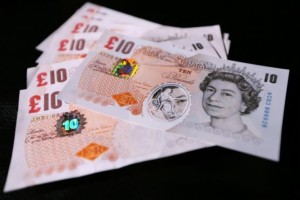 Sterling tumbled on Monday, hitting a two-year low against the yen, as concern grew that Britain would quit the European Union after influential London Mayor Boris Johnson threw his weight behind the exit campaign.

The pound fell almost 1 percent against the dollar, euro and yen, nearly reversing gains made on Friday after EU leaders agreed unanimously on a package of measures aimed at keeping Britain in the 28-nation bloc.

Johnson said on Sunday that Prime Minister David Cameron had failed to deliver fundamental reform with the agreement and that he would advocate Britain leave the EU. His stance could increase the chances Britons will vote against EU membership in a June referendum.

As dealers expect choppy trading in coming months towards the referendum, implied volatilities on sterling options rose to near highest levels in more than four years.

With investors seeking protection for a plunge in the British unit in case of “Brexit”, pound puts are in stronger demand compared to pound calls.

Risk reversal spreads, which measure the price gap between calls and puts, widened in favors of sterling puts, with the six-month spread hitting a four-year high GBP6MRR=.

Apart from the British pound, the other major currencies were steadier.

Stemming the safe-haven yen’s advance for now was speculation that G20 finance ministers and central bank governors may address routs in financial markets this year when they gather in Shanghai later this week to discuss the global uncertainty.

Their focus should be on global economic spillovers from their policy decisions, said Christine Lagarde, the managing director of the International Monetary Fund.

That helped the dollar keep some distance from a low below 111 touched earlier this month, when investors were hit by worries about slowdown in the global economy and European banks.

Yet traders also question just how much G20, a forum of countries with diverse background including both developed and developing countries, could agree on anything substantial to bolster the global economy.

“G20 have never really acted together. The best I would hope for from them is nobody will say anything disruptive to markets,” said a trader at a Western bank.

Indeed, given persistent worries about global economic health, dollar bulls shrugged off data last Friday that showed underlying U.S. consumer price inflation accelerated in January by the most in more than four years.

The figures should support the view that the Fed will gradually raise interest rates this year as forecast, but markets remained skeptical, given slowing global growth and market turbulence.

The euro weakened against the dollar to $1.1110 EUR= but stayed within its well-worn range in the past few days.