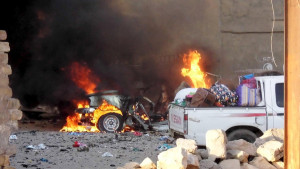 The United States and its allies staged 19 strikes against Islamic State in Iraq and Syria on Sunday in its latest round of daily attacks on the militant group, according to the coalition leading the operations.

In Iraq, five strikes near Falluja, Mosul, Ramadi and Sinjar hit four tactical units as well as other targets, the statement said.

Showdown in Venezuela as US backs Maduro rival’s power claim

UK government focused on winning court appeal – spokesman for May

Thunberg ‘a bit surprised’ to be Time Person of the Year