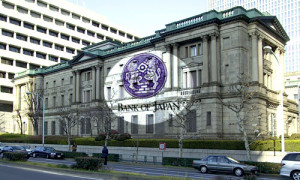 The Bank of Japan is expected to cut its negative interest rates further to minus 0.2 percent at or before its July meeting, a Reuters poll found, as consumer price inflation remains stuck far below the central bank’s target and the economy stagnates.

“In addition to oil price falls, when the BOJ judges the disappearing effects from yen’s weakness hampers price recovery, it will likely ease again,” he said.

Thirteen of 14 analysts project that the BOJ will ease policy further at or before the July meeting, the poll taken between Feb 26 and March 3 showed.

Three respondents each chose the March, April and June meetings for when the central bank would ease policy, four nominated the July meeting, and one opted for the Oct. 31 to Nov. 1 review.

The BOJ surprised markets in January by implementing a 0.1 percent charge on a portion of current account deposits that financial institutions have at the central bank.

But the move, similar to a European Central Bank programme, has so far done little to push the Japanese yen lower. It rallied seven percent against the dollar the week after the policy announcement.

A Reuters poll on Thursday found the yen was not expected to weaken to 120 to the dollar, the level it was trading at through most of 2015, until towards the end of this year.

In the absence of a weaker yen, which is helpful for Japan’s export economy and makes imports costlier, economists cut their forecasts for the core consumer price index in the latest poll.

The headline inflation measure, which includes oil products but excludes fresh food, is predicted to reach 0.4 percent in the fiscal year from April, down from the 0.6 percent projected last month.

In fiscal 2017 core CPI is seen rising 1.0 percent excluding the impact from a planned sales tax hike in April that year, down from 1.2 percent forecast in February.

“Consumer spending has been weaker than previously expected, which will make it difficult for corporations to raise prices,” said Takumi Tsunoda, senior economist at Shinkin Central Bank.

“The BOJ’s own measure of CPI is also showing signs of slowing down.”

The central bank’s new consumer price index, which excludes the effects of volatile energy and fresh food costs, rose 1.1 percent in January versus 1.3 percent in December.

The world’s third-largest economy was expected to grow 1.0 percent over for the next fiscal year, the poll showed, down from 1.2 percent projected last month.

Prime Minister Shinzo Abe will pull together a new advisory panel to debate the need for a supplementary budget for the next fiscal year. The panel is expected to meet about five times before the Group of Seven summit in late May.

But many economists surveyed said the government should not compile an additional budget soon, and predicted it would not do so.

“The government compiles extra budgets around the year-end every year, so the impact is diminishing,” said Minami of Norinchukin Research Institute.

Speculation is increasing over whether the government could delay the planned 2017 sales tax hike because the economy may be too fragile to absorb its impact.