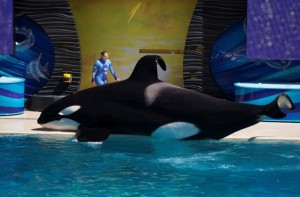 Gabriela Cowperthwaite was a mom who took her kids to SeaWorld before the death of a killer whale trainer prompted her to make her 2013 documentary “Blackfish.”

The movie, only her second documentary feature, was being credited on Thursday with persuading the U.S. theme park operator to stop breeding killer whales, and with ending its signature “Shamu” whale entertainment shows.

“This is a defining moment. The fact that SeaWorld is doing away with orca breeding marks truly meaningful change,” Los Angeles-based director Cowperthwaite said in a statement.

Animal activists were quick to give credit to “Blackfish” for effecting change.

“Huge respect to @blackfishmovie for putting orca captivity at @SeaWorld on the agenda” Greenpeace UK Oceans said on Twitter.

Critic Melissa Silverstein, founder of the website “Women and Hollywood,” said SeaWorld’s action shows the impact that a film can have.

“If you think a movie can’t make a difference, see @blackfishmovie,” Silverstein said on Twitter. “Congrats on getting @SeaWorld to change its policies toward Orcas.”

“Blackfish” has taken only a meager $2 million at the North American box office, but after screenings on CNN, on demand digital services, at film festivals and in schools, it has been seen by more than 60 million people, Cowperthwaite said in 2014.

Cowperthwaite interviewed former SeaWorld trainers, whale experts and academics to paint a portrait of the Orlando theme park’s orca Tilikum and how he was captured in the wild in 1983 at the age of two.

The Hollywood Reporter in 2013 described it as “emotionally powerful”, “harrowing” and a “damning indictment of the SeaWorld theme park franchise.”

When the movie was released, Cowperthwaite told Reuters she hoped it would “inspire others to take action.”

It did. By the end of 2013, musicians and bands like Willie Nelson, Heart and Bare Naked Ladies were withdrawing from music events organized by SeaWorld and Joan Jett and others were asking SeaWorld to stop blasting their music during its “Shamu” whale shows.

Attendance at SeaWorld parks dropped and the company’s shares fell by about 11 percent in the past year.

SeaWorld has been harshly critical of the movie, but made no mention of it on Thursday. However, Seaworld Entertainment Inc (SEAS.N) Chief Executive Officer Joel Manby acknowledged in an op-ed in the Los Angeles Times that “a growing number of people don’t think orcas belong in human care.”