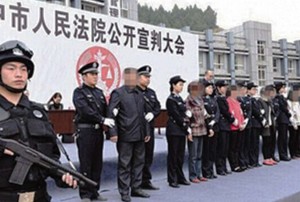 A Chinese court held an outdoor trial for eight migrant workers protesting against unpaid wages to “educate the public in law”, the state-run Beijing News reported on Friday.

Chinese courts occasionally hold public trials involving criminal offences such as drug dealing and robbery, but such trials for labor offences are rare.

The workers were charged with obstructing police during a protest they staged last year to claim unpaid wages from their employer, a developer, the paper said. The trial was held on Wednesday in Langzhong in southwestern Sichuan province.

Photos published online by the newspaper showed police holding people on stage facing a crowd, with a backdrop declaring that it was a public sentencing. The eight were sentenced to between six and eight months in prison.

Reuters’ efforts to reach the Langzhong court for comment by phone and fax were unsuccessful.

The trial came as Chinese growth experiences its deepest slowdown in 25 years, forcing companies to lay off workers as well as cut or withhold salaries.

Australia to prosecute troops for war crimes in Afghanistan