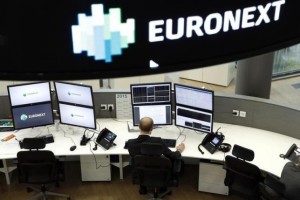 Investors cut their holdings of stocks to the lowest in at least five years in March, despite a recovery in global equity markets, with euro zone and Japanese assets bearing the brunt as doubts grew about the effectiveness of central bank stimulus.

Several managers said they were trying to avoid taking bets on markets rising or falling, preferring to maintain a neutral stance on risk assets, considering the volatility seen in markets in the first quarter.

Global stock markets sold off heavily in January and early February before rallying in March, but investors were reluctant to jump back into the fray.

The survey of 49 fund managers and chief investment officers in the United States, Europe, Britain and Japan was conducted between March 17 and 30.

Within their global equity portfolios, fund managers trimmed their euro zone holdings by one percentage point to 18.2 percent and their Japanese stock allocation to 18.9 percent from 20.2 percent in February.

Growing political risks also prompted investors to adopt a cautious stance, with the odds on Britain voting to leave the European Union shortening in March and Donald Trump taking the lead in the race to secure the Republican party’s presidential nomination.

While several investors said a British exit from the EU was not their central scenario, the uncertainty of the outcome was expected to weigh on domestic demand as businesses postponed investment decisions. The closeness of some voter polls has also weighed on the pound.

“Sterling seems to be pricing a high chance of Brexit given its weakness relative to economic data,” said Trevor Greetham, head of multi-asset at Royal London Asset Management.

Poll respondents did not expect to see Trump go on to win the White House if he secures his party’s nomination, but warned that the run-up to the U.S. presidential elections was likely to trigger bouts of heightened market volatility.

“Obviously, markets will begin to react as we draw ever closer to the presidential elections. At the moment it’s more focused on the Fed,” said Peter Lowman, chief investment officer at Investment Quorum, a UK-based wealth management firm.

Some managers also expressed concern that the low interest rate adopted by the European Central Bank and the Bank of Japan were having only a limited effect.

“Central banks are not able to stimulate growth in the long run just by implementing low or negative interest rates,” said Jan Bopp, an asset allocation strategist at Bank J Safra Sarasin. “What is needed now are fiscal policy measures.”

The BOJ adopted negative interest rates in January but the Nikkei (.N225) is still down almost 12 percent for the first quarter.

European equities (.FTEU3) are down 7.6 percent over the same period, despite a bold easing package from the ECB in March, which cut rates and expand asset purchases to corporate debt. However, it also signaled an end to further rate cuts, prompting a sell-off in European equities and eurozone bonds.

In their global fixed income portfolios, investors cut their euro zone bond holdings by almost 3 percentage points to 25.7 percent, the lowest since September 2015.

They also cut their Japanese bond holdings by 2 percentage points to 12.8 percent, the lowest since June 2015.

“I doubt they are of much practical benefit and instead reinforce the idea that the world is stuck in a deflationary spiral,” said Rob Pemberton, investment director at UK-based HFM Columbus.

“They may also do a fair amount of damage to the profitability of commercial banks, raising fears that we would see a systemic financial crash similar to 2008.”

Raphael Gallardo, a strategist at Natixis Asset Management, said the amount of stimulus needed had to keep getting bigger and bigger: “The more we prolong the stimulus, the deeper the potential downturn when monetary stimulus stops.”