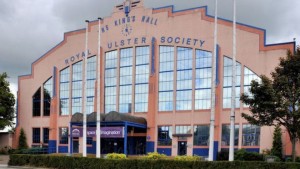 Plans have been announced to turn the King’s Hall site in south Belfast into a health and wellbeing park.

The £100m redevelopment plan will include community and leisure facilities, hotel and restaurants.

Private developers, Benmore Healthcare, are behind the project.

However, it will offer both public and private facilities all on one site.

As elsewhere in Northern Ireland, GPs will be able to rent space, while local health trusts could also lease space to provide services including diagnostics.

Catering for all age groups, there could also be creche facilities and residential care for older people.

This is the first phase of wider proposals that could eventually transform the 16-acre site into a health care park with community and leisure facilities including a gym, restaurants and hotel.

The iconic King’s Hall building would also be restored.

David Burrows, chief executive of Benmore Group, says the aim is to create a landmark in healthcare.

“We will refurbish the art deco building, restoring it to its former glory,” he said.

“Alongside a new adjoining building we will create a modern primary care centre.”

With a plan drawn up, the next stage will be to consult the local community.

According to Benmore Healthcare, it will be seeking views from the community through a series of public exhibitions starting next month.