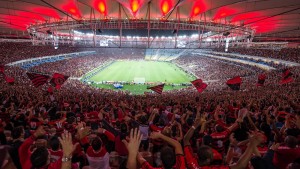 One of the biggest derbies between Rio de Janeiro clubs took place in Sao Paulo for the first time in 74 years on Sunday due to Olympic refits leaving the host city with no suitable stadiums.

The match between Flamengo and Fluminense at the Pacaembu stadium in Sao Paulo, Brazil’s biggest city and some 400km from Rio, was the equivalent of London Premier League clubs Arsenal and Tottenham Hotspur playing each other in Manchester.

It ended goalless, like the last meeting in Sao Paulo between the sides in 1942.

Some 30,188 fans watched Sunday’s game, one of the biggest crowds this season in the Rio de Janeiro state championship.

Both the Maracana and the Olympic stadium in Rio are being updated for August’s Olympic games, the first to be held in South America.

The opening and closing ceremonies will be held at the Maracana and the track is being laid for the prestigious athletic events at the Olympic stadium.

Nissan shareholders OK ouster of ex-chair Ghosn from board