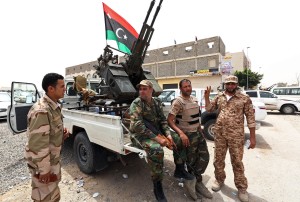 There are no plans to extend airstrikes in Libya or deploy UK troops to provide security for its newly-appointed unity government, ministers have insisted.

The Foreign Affairs Committee demanded an explanation from the foreign secretary, amid reports the UK was preparing to send 1,000 personnel.

Chairman Crispin Blunt said they had been told during a visit to the region that the British contingent would be part of an international force.

But the government said this was wrong.

The BBC’s defence correspondent Jonathan Beale said there were plans to train Libyans but the UK was waiting to be invited by the country’s unity government.

Mr Blunt said MPs on the committee – which has a Conservative majority – had heard UK troops would be part of a 6,000-strong force sent to train the Libyan army and provide security for the new Government of National Accord.

“It appears the defence secretary (Michael Fallon) will agree the UK contribution to this force at a European conference this week,” he wrote in a letter to Foreign Secretary Philip Hammond.

Mr Blunt said they had also heard one of the first actions of the UN-backed government in Libya was likely to be a request to Britain and its allies to mount air strikes against so-called Islamic State (IS) targets in the North African state.

He called on Mr Hammond to make a Commons statement before Mr Fallon agreed to commit any British forces in Libya.

However, a government spokesman said that what the committee heard during its visit was “wrong on a number of counts”.

“There are no plans to extend air strikes to Libya nor are there plans to send British troops to provide security on the ground in Libya.

“It is therefore also wrong to suggest the defence secretary will agree any UK contribution this week,” the spokesman said.

In 2011, the UK led international efforts, along with France, to back rebels fighting to overthrow Libyan leader Muammar Gaddafi.

The rebels succeeded in ousting Gaddafi but the country has since descended into chaos, with two rival governments and the formation of hundreds of militias, some allied to IS.

Last week, US President Barack Obama appeared to criticise the UK and France, telling an interviewer they had allowed Libya to become a “mess”.