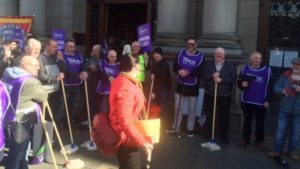 More than 100 primary school janitors in Glasgow are due to begin another three-day strike over a pay dispute.

Members of the Unison union want extra pay for tasks which they say are “dirty, unpleasant, involve regularly working outside or heavy lifting”.

They began boycotting some duties in January and staged a walkout in March.

The janitors work for Cordia, a body of Glasgow City Council, which said it was working to ensure schools ran as normal but could not rule out some disruption.

A council spokeswoman said: “This dispute is between the employers, Cordia, and the section of janitors who are members of the union, Unison.

“Contrary to the impression given in sections of the media it does not involve every school janitor and is inaccurate to say that there have been no discussions to try to settle the dispute.

“The council will continue to work with Cordia to ensure that our schools and nurseries will be open for business as usual.”

The spokeswoman added: “Our expectation is that all Breakfast Clubs will operate as normal during the three-day industrial action.

“However, parents and carers need to be aware that this is subject to change at short notice depending on local arrangements and circumstances.”

Unison said janitors were entitled to a Working Context and Demands Payment which ranges from about £500 to more than £1,000.

The union said that since members began boycotting certain duties, schools and playgrounds were not being cleaned as quickly and thoroughly as previously.

The union said: “Unison has apologised to parents and carers for any inconvenience caused during the dispute.

“The union has also advised parents and carers that during the industrial action certain practices have come to light that could be considered as potentially detrimental for pupils and staff.

“The union has advised parents and carers to check that hazards are not occurring in their school”.

Unison said possible hazards included “glass, excrement, drug paraphernalia” and warned of the dangers of sickness not being cleared within schools “immediately or without proper protection”.

India orders Kashmir clampdown ahead of anniversary of militant killing