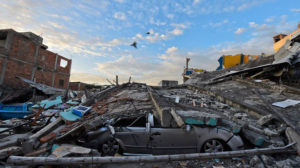 The U.S. Geological Survey has reported that a 6.7-magnitude earthquake has hit Ecuador near the Pacific coast area where a devastating quake hit on April 16.

The survey said Wednesday that the quake’s epicenter was 34 kilometers (21 miles) from the town of Rosa Zarate.

The much larger magnitude 7.8 earthquake killed 660 and initially left tens of thousands homeless.

Ecuador was already struggling economically before the April disaster. President Rafael Correa has hiked taxes to fund the recovery but says it will take years to rebuild the beach towns and tourist hubs leveled by the quake.