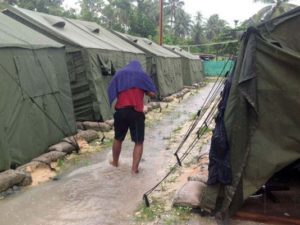 Cambodia said on Tuesday it will send a team to a South Pacific detention centre next month to interview two refugees who have volunteered to be resettled, reviving an agreement with Australia that seemed on the verge of collapse.

Australia has vowed to stop asylum seekers sailing from Indonesia and Sri Lanka and landing on its shores, instead intercepting boats at sea and holding those on board in camps in Papua New Guinea and Nauru.

Cambodia agreed with Australia in 2014 to take in refugees from Nauru in exchange for A$40 million (19.7 million pounds) in aid, but it later threatened to withdraw from the agreement.

Only five people have gone to Cambodia under the pact and three of them later chose to go back home. But now two more might be on their way.

“Our team is ready to go and interview two more refugees who volunteered to be resettled,” Tan Sovichea, head of the Interior Ministry’s refugee unit, told Reuters on Tuesday.

Sovichea said his three-man team would fly to Nauru in the first week of June to vet the refugees, an Iranian man and woman.

Rights groups have condemned Australia for trying to resettle refugees in poorer countries such as Cambodia, which is frequently accused of human rights abuses and has an economy less than one percent the size of Australia’s.

A Rohingya Muslim man from Myanmar and an Iranian couple, who all left Nauru for Cambodia last year, have since gone home. The two remaining refugees in Cambodia are a Rohingya and an Iranian.

Sovichea said Australia had originally delayed the trip, which was supposed to be on May 2, for unspecified reasons, and Australian officials had not yet set an exact date for the trip in June.

Officials at Australia’s Foreign Ministry and Immigration Department did not immediately respond to calls and emails from Reuters seeking comment.

Obama Authorizes Extension of US Troops’ Mission in Afghanistan